What is a Temple?

The Church of Jesus Christ of Latter-day Saints has been building temples since the 1830s. Latter-day Saint temples are considered houses of God, a place of holiness and peace separate from the preoccupations of the world. They provide a place where Church members make formal promises and commitments to God. They are also the place where the highest sacraments of the faith occur — the marriage of couples and the “sealing” of families for eternity.

Click here to learn more about what happens inside temples and don’t miss the opportunity to explore the a  Washington D.C. Temple Visitors’ Center.

Families Can Be Forever

Members of The Church of Jesus Christ of Latter-day Saints believe that each human born on earth lived first as a spirit in heaven with God, our Heavenly Father. Each one of us comes to earth to be tested through the mortal experience. By following the principles of the gospel here on earth, each of us may return to the presence of God, where we will live eternally with our families.

The Latter-day Saint teaching that family relationships on earth continue after death is distinctive among Christian faiths. To last beyond mortality, marriages must take place in a temple. Couples who join the Church after they are already married may also have their marriages “sealed” in identical ceremonies, and their children may be sealed to them. Thus, Latter-day Saint (sometimes called “Mormon”) temples are not places of regular Sunday or congregational worship. They are built specifically for these “eternal marriages” and other individual and family-centered ceremonies. For the promises of the temple to remain in effect, a husband and wife must love and be faithful to each other throughout their marriage and continue to follow a course of Christian service and commitment throughout their lives. 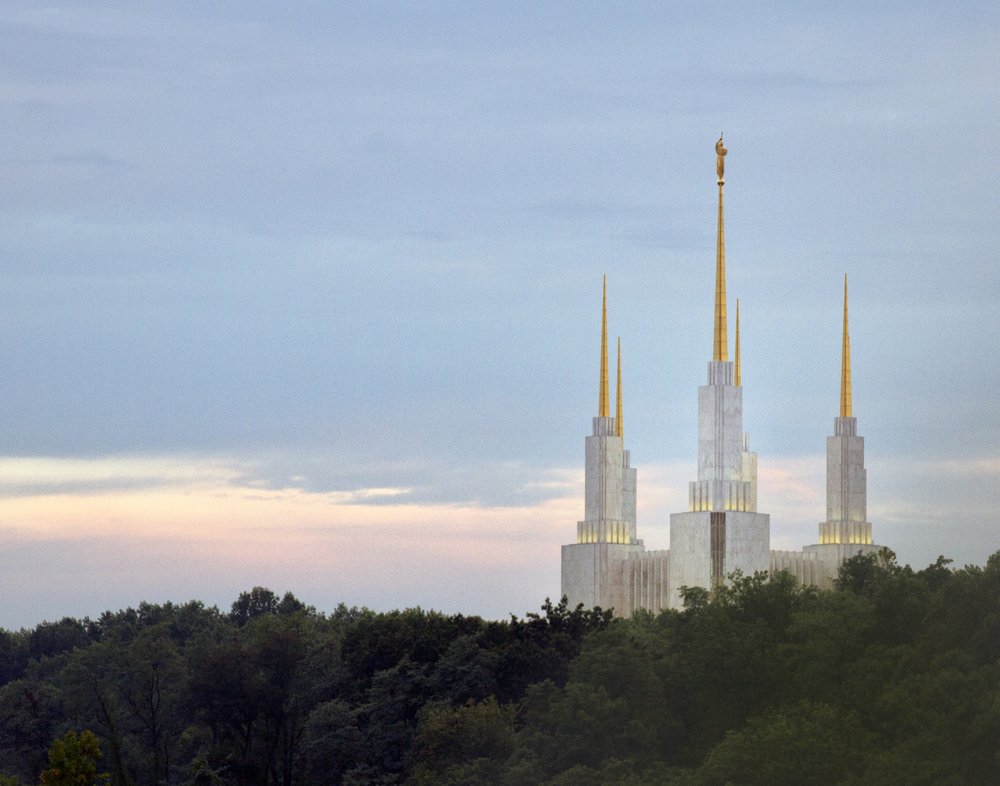 Learn More About Our Beliefs

On February 27, 2020, The Church of Jesus Christ of Latter-day Saints released the following renderings that show the planned completion of the temple. Click here to view the full gallery of interior renderings.

History of the D.C. Temple

On a serene 57.4-acre hilltop in Kensington, Maryland, the Washington D.C. Temple creates an impressive sight for travelers along the Capital Beltway. The 16th operating temple of The Church of Jesus Christ of Latter-day Saints serves Church members in the District of Columbia, Virginia, Pennsylvania, Maryland, Delaware, West Virginia, and New Jersey.

The Washington D.C. Temple was the first Latter-day Saint temple to be built on the East Coast of the United States. When the temple was completed in 1974, it served all Latter-day Saints living east of the Mississippi and some Latter-day Saints in South America and Canada. At 160,000 square feet, it is the third-largest temple in the world. It contains instruction rooms and sealing rooms, where marriages are performed.

Previous
Next
Latter-day Saint architects Harold K. Beecher, Henry P. Fetzer, Fred L. Markham, and Keith W. Wilcox designed the Washington D.C. Temple in a collaborative process. Each offered designs for review and critique, which were approved by the Church’s First Presidency. Through this process, the final design emerged representing the best ideas of each architect. This temple, which the architects described as a building of “beauty, significance, and distinction,” took shape as an elongated diamond with towers on the corners.
On the east side of the temple, the central tower reaches a height of 288 feet, making it the tallest spire on a Latter-day Saint temple anywhere in the world. The three spires on the east and the three on the west represent two branches of Church leadership, the Aaronic and Melchizedek Priesthoods. The six-spire design echoes the design of the Salt Lake Temple. An 18-foot-tall sculpture of angel Moroni created by Avard Fairbanks graces the tallest spire. The statue, cast in bronze and covered in gold leaf, was the third to be placed on a temple. Fairbanks portrayed the angel Moroni lifting a trumpet to his lips and holding golden plates in his left arm. Latter-day Saint sculptor Franz Johansen created 16 bronze medallions — eight of which decorate the temple gates and eight of which decorate the temple doors — illustrating the sun, moon, and stars, among other designs.
The temple is finished with 173,000 square feet of Alabama white marble, which is cut to a thickness of ⅝” in some places, allowing sunlight to filter softly through the walls. Faceted windows of colored glass ascend the east and west ends of the temple. These seven-foot-wide panels rise in red and orange hues, softening to blue, violet, and eventually white as they reach the top. One of the architects noted the symbolism of the change in colors — purity comes with aspiring toward heavenly things. A similar progression from color to white and gold can be seen in the interior furnishings of the temple. Nearly six years after the temple was announced on November 15, 1968, the temple was ready to be dedicated. The temple opened to the public from September 17 to October 19, 1974, and more than 750,000 visitors toured the building. High-profile visitors, including Betty Ford, Gerald Ford’s wife, were among those who viewed the temple interior. The temple was dedicated in 10 sessions held from November 19 to 22, 1974. Church President Spencer W. Kimball offered the dedicatory prayer, in which he gave thanks for those who paved the way for the founding of the United States: “We are grateful that thou didst cause this land to be rediscovered and settled by people who founded a great nation with an inspired constitution guaranteeing freedom in which there could come the glorious restoration of the gospel and the Church of thy Beloved Son.”2

On March 3, 2018, the Washington D.C. Temple closed for an extensive renovation. The building received considerable upgrades to its mechanical system and the finishes and furnishings were refreshed. There were also changes made to the landscaping and a small addition to the exterior to enclose a new elevator system and stairs.

Adjacent to the temple, the Washington D.C. Temple Visitors’ Center provides the opportunity for visitors to learn more about temples and the Church’s teachings.

Height: 288 feet (the tallest
Latter-day Saint temple in the world)

This website is not an official site of
The Church of Jesus Christ of Latter-day Saints.